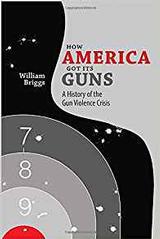 How America got its guns : a history of the gun violence crisis
by William Briggs.
Available in the Library:  HV7436 .B75 2017

In the United States more than thirty thousand deaths each year can be attributed to firearms. This book on the history of guns in America examines the Second Amendment and the laws and court cases it has spawned. The author's thorough and objective account shows the complexities of the issue, which are so often reduced to bumper-sticker slogans, and suggests ways in which gun violence in this country can be reduced. [11/17]

These resources are intended to be a starting point only and are not a comprehensive guide to all the resources available.  Always be sure to Ask a Librarian.

General Library materials on contemporary world history are found in the Library under the classification D410-D725 (listed in the Library Catalog under the subject heading History, Modern--20th century). Histories of specific countries of Europe, Asia, Africa and Oceania are found in DA through DU. History of the Americas are in E and F, with the history of the United States in general in E184-E893, with United States local history in F1-F975.

For more titles, search the Library Catalog using the subject terms listed above in bold.

♦  The 9/11 Encyclopedia / Stephen Atkins (ed.). [2 volumes]
Ref. HV6432.7 .A85 2011 Vol. 1
Ref. HV6432.7 .A85 2011 Vol. 2
“Commemorating the 10th anniversary of the attacks on the World Trade Center and Pentagon, The 9/11 Encyclopedia: Second Edition offers valuable perspective on this emotionally charged and multidimensional subject. This comprehensive two-volume encyclopedia details the events leading up to the attacks, going back a decade prior to 9/11, and covers all the major players involved. It also examines events and discoveries since 2001 that have influenced our understanding of--and reactions to--the world-changing attacks” (from Amazon). [5/15]
♦  American decades / edited by Vincent Tompkins.
Ref. E169.12 .A419 1994 Vol. 1-11
American Decades is a 11 volume set of contemporary American history from the 1900s to 2009. Each volume covers a different decade. These volumes cover American people, places, events media, religion, law, sports and more. Each volume includes a timeline of historical events, bibliographical references and indexes.
♦  The American Heritage encyclopedia of American history /
general editor, John Mack Faragher.
Ref. E174 .A535 1998
Expansive volume of American history offers nearly 3,000 articles providing the essential details to major events as well as little-known episodes.
♦  The American reader : words that moved a nation /
edited by Diane Ravitch. Rev. 2nd ed.
Ref. E173 .A753 2000
An anthology of 200 poems, speeches, songs, essays, letters and documents that capture American culture and history throughout the decades.
The Library also owns the 1st HarperPerennial ed.
♦  The Cold War : an international history, 1947-1991 / S.J. Ball.
D843 .B253 1998
♦  Cold war, cold peace : the United States and Russia since 1945 / by Bernard A. Weisberger ; introduction by Harrison E. Salisbury.
D445 .W37 1987
♦  Cold War culture : media and the arts, 1945-1990 / Richard A. Schwartz
Ref. E169.12 .S39 1998
How the Cold War shaped American culture from 1945-1990. This book organizes Cold War culture alphabetically within categories such as art, cartoons, consumer goods, dance, film, games and toys, television and theater. Each of these categories has a broad general article as well as specific individual entries. [6/16]
♦  Reference library of Black America /
edited by Jessie Carney Smith, Joseph M. Palmisano.
Ref. E185 .R44 2000 Vols. 1-5
Contains biographical data on an imposing roster of historical and contemporary personalities in the African American community. Historical narratives, statistical tables and graphs present in great detail nearly 500 years of history. The Reference Library of Black America is widely considered as the finest set of Black History month books available anywhere.  [6/16]

♦  American Communist History (e-journal 2002 - present, 18 month delay)
Concerned with the history of the Communist Party in the United States and its social, political, economic and cultural impact on its members, on its opponents, and the public at large. [4/16]
♦  American History  (e-journal  1994 - present)
Feature articles and special issues presenting the best available historic and contemporary illustrations and authoritative narratives on all aspects of
American history.  [4/16]
♦  American Heritage (in Library) (e-journal 1990-2010)
Focuses on American history, presenting essays on topics relating to
events in US history. [12/16]
♦  Black History Bulletin  (e-journal 2002 - 2011)
Dedicated to enhancing teaching and learning in the areas of history.  Its aim is to publish, generate, and disseminate peer-reviewed information about African Americans in U.S. history, the African Diaspora generally, and the peoples of Africa.    [12/16]
♦  Rhode Island History (online   1942 - 2010)
♦  Smithsonian (in Library) (e-journal 1990 - present) (online 1995 - present)
A monthly magazine chronicles the arts, history, sciences and popular culture of
the times. [12/16]
♦  War In History  (e-journal 1997 - 2016)
Peer reviewed articles which attempt to place military history into a broader definition of history by examining war in all its aspects: economic, social and political as well as purely military. Articles cover all time periods. [12/16]

Listed are selected media titles pertinent to your elective:

♦  20th century turning points in U.S. history [videorecording] / produced by Centre Communications for Ambrose Video Publishing.
Media (DVD) E741 .T84 2004 Pts. 1-4
This eight-part series (on 4 DVDs) provides a clear overview of the people and events that distinguished the 20th century by looking at specific points in time that are considered significant pivotal moments in history. Includes rare archival footage and photographs, authentic recordings, and other primary source documents that bring history to life.
♦  Eyes on the prize : America's civil rights years, 1954-1965 [videorecording]  / creator and executive producer, Henry Hampton ; a production of Blackside.
Media (DVD) E185.61 .E94 2010
The definitive story of the Civil Rights era from the point of view of the ordinary men and women whose extraordinary actions launched a movement that changed the fabric of American life, and embodied a struggle whose reverberations are felt today.
♦  From the Earth to the Moon [videorecording] / Tom Hanks, Imagine Entertainment and HBO presents a Clavius Base/Imagine Entertainment production.
Media (DVD) TL789.8.U6 F766 2005
Tells the dramatic story of the Apollo missions and their heroic astronauts. Go from President John F. Kennedy's historic speech to the manned space missions and through to the defining moment of the space program - putting a man on the moon. These are the stories of the men, women and children who lived, breathed and manufactured from the power of human will, one of the greatest achievements in the history of mankind.
♦  You must be this tall : the story of Rocky Point Park  [videorecording]/ Visual Army presents a Midway Pictures film, a Dave Bettencourt film.
Media (DVD) GV1853.3.R42 R62 2007
This film documents the history of Rocky Point Park, an amusement park and shore dinner hall situated along the coast of the Narragansett Bay in Warwick, RI. For over
150 years, New Englanders flocked to the spot, for a game of Sunday baseball, for a picnic, for a rock-n-roll concert, or to enjoy the rides, until the park closed in 1996.  The story of Rocky Point Park is told entirely by the people who lived there, worked there, and spent every waking moment of every summer at the park. [6/16]

Listed are selected web resources pertinent to your elective: