Resources for History of Aviation 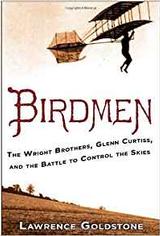 Birdmen : the Wright Brothers, Glenn Curtiss, and the battle to control the skies by Lawrence Goldstone.
Available in the Library:  TL521 .G568 2014
"The feud between this nation's great air pioneers, the Wright brothers and Glenn Curtiss, was a collision of unyielding and profoundly American personalities. On one side, a pair of tenacious siblings who together had solved the centuries-old riddle of powered, heavier-than-air flight. On the other, an audacious motorcycle racer whose innovative aircraft became synonymous in the public mind with death-defying stunts. For more than a decade, they battled each other in court, at air shows, and in the newspapers. The outcome of this contest of wills would shape the course of aviation history -- and take a fearsome toll on the men involved. Birdmen sets the engrossing story of the Wrights' war with Curtiss against the thrilling backdrop of the early years of manned flight, and is rich with period detail and larger-than-life personalities.  -- Dust jacket. [11/17]

These resources are intended to be a starting point only and are not a comprehensive guide to all the resources available.  Always be sure to Ask a Librarian.

For more titles, search the Library Catalog using the subject terms listed above in bold.

♦  In the cockpit : inside 50 history-making aircraft / photography by Eric F. Long and Mark A. Avino ; text by Dana Bell ; foreword by John Travolta.
TL681.C6 L665 2007
The Smithsonian National Air and Space Museum holds the country's premier collection of historic aircrafts.  Each entry includes archival images of the craft and authoritative text that places each one in the context of the development of aviation technology and world history. [ [3/18]
♦  Smithsonian atlas of world aviation : charting the history of flight from the first balloons to today's most advanced aircraft / [compiled by] Dana Bell.
TL515 .S525 2008
A world history of flight provides a lavishly illustrated tour of everything from wartime air campaigns to the latest experimental planes, in an oversized volume that is complemented by descriptive charts and flight-pattern layouts. [3/18]

Listed are selected media titles pertinent to your elective:

Listed are selected web resources pertinent to your elective:
♦  American Institute of Aeronautics and Astronautics (AIAA)
URL: https://www.aiaa.org
AIAA is the world’s largest technical society dedicated to the global aerospace profession. Created in 1963 by the American Rocket Society (founded in 1930 as the American Interplanetary Society), and the Institute of the Aerospace Sciences (established in 1933 as the Institute of the Aeronautical Sciences), AIAA carries forth a proud tradition of more than 80 years of aerospace leadership. [3/18]
♦  Aviation Week
URL: http://aviationweek.com/
Aviation Week is the largest information and services provider to the global commercial, defense, maintenance/repair/overhaul (MRO), space and business aviation communities and plays a critical role in connecting industry professionals worldwide. [3/18]
♦  Directory of Airplanes: their designers and manufacturers
URL: http://sirismm.si.edu/siris/aboutairplanedirectory.htm
The Smithsonian National Air and Space Museum.  " an effort to process and describe the Aircraft Reference Files in the Museum's Archives Division. Although we recognize that the 34,000 aircraft and 6600 companies and designers featured here do not constitute a complete listing of aircraft types..." [3/18]
♦  National Air and Space Museum
URL: https://airandspace.si.edu/
The Smithsonian's National Air and Space Museum commemorates the national development of aviation and spaceflight.   [3/18]